As well as being the entertainment director, I write the participant missive (newsletter) for the Great Dickens Christmas Fair, most of which is usually in-house things about stages and parades and such, but this is a special one regarding the bicentennial celebrations for the birth of Charles Dickens, so I thought I’d share. The formatting didn’t turn out perfectly, but after days of churning out 1099’s I hope you’ll forgive me.

Please visit the website of the Great Dickens Christmas Fair at dickensfair.com

We are rapidly approaching the 200th anniversary of the birth of our progenitor, the illustrious Charles Dickens, on February 7th. There are celebrations and exhibits planned all over the world, including a very special event this Saturday by our friends at PEERS.

We are busy planning celebrations that will take place at this years Great Dickens Christmas Fair and will keep you informed. We invite your creative input! Please email your ideas suggestions to office@redbarnproductions.org.

We also have a page on the Dickens 2012 website:
http://www.dickens2012.org/event/34th-annual-great-dickens-christmas-fair-and-victorian-holiday-party

Many thanks to Rickie Bolin, Therese Porter, Cathleen Myers and Heidi B for their contributions to this missive.

Celebrate the 200th anniversary of Charles Dickens’ birth at a formal Victorian Ball and theatrical performance hosted by Prime Minister Lord Palmerston for Her Majesty Queen Victoria and His Royal Highness Prince Albert.

Dance beautiful rotary waltzes, polkas, mazurka waltzes, schottisches, quadrilles, and other set dances popular during the time of Charles Dickens, beautifully arranged by Bangers & Mash, the finest band in Dickens’ London. All set dances will be briefly taught or called at the ball.

Mr. Dickens himself (Robert Young) will open the ball with a dramatic reading of one of his most exciting scenes, “Sykes and Nancy,” adapted from Oliver Twist. This is a thrilling theatrical re-creation not to be missed! Also performing are Miss Fanny Price and Mr. Daniel Boozer of the Peerless Music Hall and the celebrated “Swedish Nightingale,” Miss Jenny Lind.

The nominal year of our event is 1855, but suggested costume is evening dress from the time of Mr. Dickens’ active literary career (1837-1871) or modern evening dress. Given the talent of our San Francisco Bay Area costumers, this should be an extremely beautiful costume evening, but, as always, costumes are admired but not required.

Punch and a light Olde English snack will be served (Your potluck contributions to Lady Palmerston’s kitchen are most appreciated).

Red Barn Productions and Foolish Tree Films will be creating a YouTube piece of the evening to co-promote PEERS and the Dickens Fair for the Bicentennial.  It will be posted on his actual birthday February 7th!

A Biography
(from Therese Porter)

Charles John Huffam Dickens was born on 7 February 1812 in Landport, Portsea. The second of the eight children of John and Elizabeth Dickens – charming but impecunious members of the struggling genteel class – he grew grew up to become one of the greatest and most loved writers of the 19th century.
His family moved almost constantly throughout his childhood, eventually confining their peregrinations to London and its immediate environs; Dickens came to know – and describe – the city so well that is forever associated with him. He received little formal education, and at the age of twelve was sent to work in a shoeblacking factory after his father was consigned to debtors prison. The sprectre of poverty, debt, and the hardships of children would forever haunt his prose.
After a passionate but thwarted love affair with Maria Beandnell, a banker’s daughter, he married Catherine Hogarth, the daughter of a Scots family prominent in the arts. He and Catherine had ten children, and although the marriage was initially happy it eventually ended in a scandalous legal separation, in part due to his involvement with Ellen Ternan, a young actress.
Throughout his life he pursued multiple careers as a journalist, critic, amateur actor and stage manager, playwright and philanthropist. Although his quick mind, lively intelligence, penetrating curiosity and prodigious energy would have allowed him to succeed in any of these professions, the world is blessed by his turning in his young manhood to writing for his living. He went on to create some of the most enduring characters in literature, rivaling even Shakepeare. Oliver Twist, Samuel Pickwick, Sam Weller, Miss Havisham, Mrs Gamp, Nicholas Nickleby, and so many more – these uniquely realised characters live as vividly today as they did to his earliest readers. His deep interest in the problems of his time generated real change and controversy in his lifetime, and the term “Dickensian” still has the power to invoke certain conditions. His life was as intriguing and filled with wonder as any of his novels, and many of the situations and people he encountered found their ways into his works.

He virtually invented the modern Christmas with a series of Yuletide themed books and stories, the most popular of which was “A Christmas Carol,” published in 1843. Renowned for his lively and lavish entertaining, he was himself a great celebrator and promoter of Christmas for most of his life.In many ways Dickens was the harbinger of the modern celebrity author and in his time he was universally known, loved and celebrated. He traveled extensively on the Continent and visited America twice. The last several years of his life were spent giving wildly popular dramatic readings of his written works. He died of a stroke at the age of 58 in 1870, at his country home of Gads Hill and was buried in Westminster Abbey.

His works are still read, taught and adapted to the stage and screen, and none of his works has gone out of print.

A Wreathlaying Ceremony in Westminster Abbey

A wreathlaying ceremony will take place in Poets’ Corner, Westminster Abbey, at 11am on Tuesday 7 February 2012. The ceremony will include readings from the Dickens’s novels and his other writings by actor and director Ralph Fiennes, author Claire Tomalin and two of Dickens’s descendants.

The Dean of Westminster, the Very Reverend Dr John Hall, said: ‘Dickens’  humanity and compassion made an extraordinary impact on Victorian England through his writings, which remain immensely popular. This bicentenary should help renew our commitment to improving the lot of the disadvantaged of our own day.’

All tickets for this event have now been allocated.

Exhibitions Around the World

Dickens 2012:
http://www.dickens2012.org/section/exhibitions
– a master list of sorts that compiles major events, exhibitions, performances and other resources from around the world.

The Dickens Project at University of California at Santa Cruz
http://dickens.ucsc.edu/

Charles Dickens’ London: Death, Duplicity And Opium Dens Revealed
http://www.huffingtonpost.co.uk/2011/12/08/dickens-london-death-christmas-carol-opium-oliver-twist_n_1135890.html
– an article on the exhibit; from the Huffington Post.

A Tale of one man and his city…

http://www.victorianamagazine.com/archives/14101
– another article on the exhibit; from Victorian Magazine

A Hankering after Ghosts: Charles Dickens and the Supernatural
http://www.bl.uk/whatson/exhibitions/cdickens/index.html
– an exhibit on Dickens’ fascination with the supernatural.

http://www.bl.uk/learning/tarea/secondaryfehe/dickenslecture
/dickenslectureseries.html
– an online lecture series to accompany the exhibit on Dickens’ interest in supernatural phenomena.

http://www.bl.uk/learning/langlit/dickens/dickenshome.html
– “Dickens in Context” – resources to investigate the key themes of Dickens’s novels. 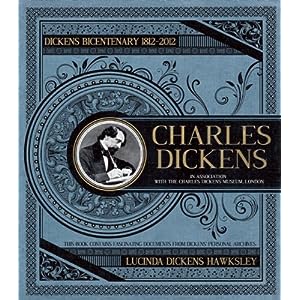 Becoming Dickens: The Invention of a Novelist
by Robert Douglas-Fairhurst
http://www.amazon.com/Becoming-Dickens-Invention-Robert-Douglas-Fairhurst/dp/0674050037/ref=sr_1_3?s=books&ie=UTF8&qid=1328039042&sr=1-3

Time Magazine
http://entertainment.time.com/tag/top-10-charles-dickens-novels/
-Building up to Charles Dickens’ birthday, TIME will be posting commentary on novel a day in a countdown to the top Dickens novel of all time.

DickensBlog
http://dickensblog.typepad.com/dickensblog/
– A blog for all things Dickens: quotes, reflections, adaptations, references and tributes from other authors, and more.

The Victorian Web
http://www.victorianweb.org/authors/dickens/index.html
– a comprehensive list of resources, printed and on the web. Includes information on historical context, scholarly writing on themes/characterization/etc and other commentary and imagery.