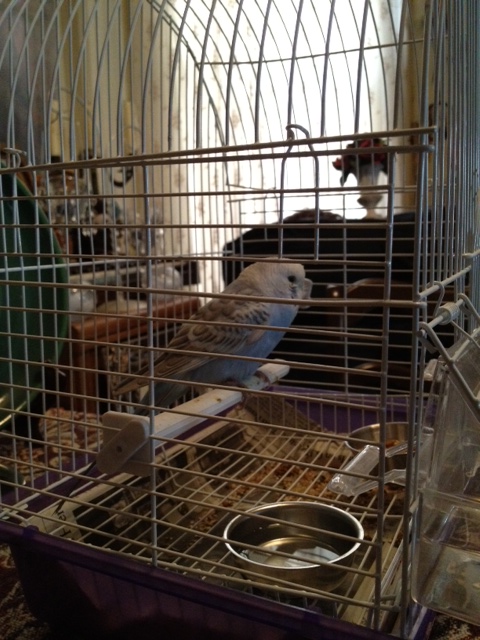 So, Tanya was on her way up our hill to visit the night before last. As I walked outside and Pete emerged from the garage there was a flurry of feathers and a little blue and white parakeet fluttered by. We tried carefully to catch it, but after attempt #2 it went straight for our busy street. A car went right over it, but somehow did not squish it, only causing a tumble and momentary discombobulation, which allowed us to stop traffic and scoop it up. Pete cradled it carefully in his hands, got nipped a few times , and Tanya went to find the folks she had seen looking for it.

She couldn’t find them but remembered that the woman walking a terrier (named Frankie) had been with them. It turns out she was their neighbor, and although it wasn’t their bird, they did have a French bulldog (perhaps that’s why they couldn’t keep a bird). They did have a small traveling cage which they loaned us, so we currently have at least a temporary new feathered roommate, Pete nicknamed “Cooper” after the blue Mini-Cooper whose near miss allowed us to catch it.

Cooper is blue and white, in pretty good shape, and we think a young female. We’ve checked with the pet store in Noe Valley, posted on Twitter, CraigsList, SFGate. I feel like the poor little thing is missing someone and someone is missing her. If you are missing a little blue parakeet, please let us know.