Who’s Your Favorite Doctor? (Because I’m a big nerd…) 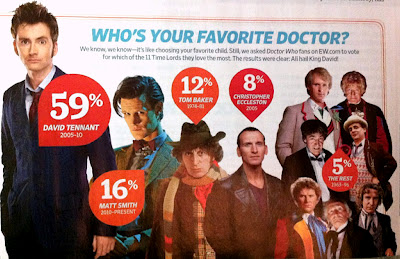 “As part of the build up to series 7 of Doctor Who, US pop culture mag Entertainment Weekly asked their online readers to vote for their favourite incarnation of the Doctor.

The results are in and they are very clear: David Tennant has blown away the competition, winning the vote easily with a lead of 59%. His nearest rival, Matt Smith, came in at only 16%. Tom Baker and Chris Eccleston picked up third and fourth place respectively, while the remaining seven Doctors could only muster 5% of the vote between them.”